It's been a long wait since Abu Dhabi 2010, especially since the season was supposed to have started a couple of weeks ago in Bahrain. I have been waiting to see the cars take to the track at Melbourne and see the results of practice and qualifying, where we will finally get a glimpse into the actual pecking order of the 2011 season. Red Bull and Ferrari seem to have the legs on the rest of the grid, with Mercedes seeming a close third.

Mclaren are supposed to have worked on their car since the last test at Barcelona and have altered some of their radical design and exhaust solutions for more conventional ones, in a bid to inch closer to the front runners. Renault, with their original front facing exhausts, have inspired quite a few of the teams to try a similar solution, which seems to aid downforce and grip levels by directing the exhaust gases towards body panels which channel the hot air away from the rear wing and thereby letting cooler and cleaner air work the rear wings.

The tight rear packaging of the Williams FW33 seemed to be working for Rubens Barichello during the inital Barcelona test, and it will be interesting to watch where they will be placed this Saturday evening after qualifying.

Toro Rosso have worked on a double floor solution with long exhausts. I expect them to have the new and improved Team Lotus hot on their heels, as they seem to be the only new team to have made a significant step forward from last year.

Force India have been struggling with their car, with Adrian Sutil complaining about the lack of grip on the car in its current guise. Team boss Mallya, Sutil and Di Resta will be hoping the engineers come up with some new bits for the car in order to get further than where they find themselves at the moment.

Virgin seem to be exactly where they were last year, which is at the rear end of the field. They were only faster than HRT in testing with the latter using last years car up until the last test, where they launched their machine for this year. With no testing under its wheels the new look F111 will have its first outing on Firday at Melbourne with its all new driver line up of Indian F1 returnee Narain Karthikeyan and Force India reject Vitantonio Liuzzi. Liuzzi has shown his worth to the team with improving the setup of the car and pulling time on his first test itself, and they are hoping his experience and the money he and Karthikeyan are bringing in will help HRT move ahead of Virgin and catch up with the rest of the pack.

Vettel is raring to go and defend his title, while Webber is out to prove his worth in what could be his last year at Red Bull. He wants the title more than he wanted it last year, but he is going to have to fight his now world champion team mate and the Scarlet cars, with the clear team leader Alonso ahead of Massa. Felipe has to show his worth to the team bosses if he wants to keep his drive for the next year. Schumacher and Rosberg should not be too far behind with the W02 proving that all it suffered from last year was its smaller than small budget in 2009 which did not give Brawn enough room to work on the 2010 car as he would have liked. But now with the full backing of Mercedes and with having worked on the W02 since the summer of last year where they shifted focus from the W01, in order to work on the new car so that they could challenge for wins instead of fighting in the mid field and having to push a Williams into a wall. Schumacher showed the pace of the new car at the final dry day of testing where he set the fastest time of of all cars this year at Barcelona. 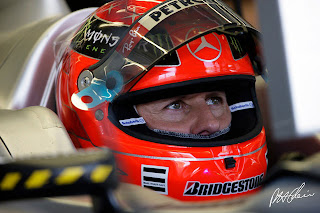 The front adjustable wings are gone along with the banned F-Duct and double diffusers. The new fast wearing Pirelli tyres along with the introduction of the DRS system, return of the KERS and 107% rule and the change in minimum weight of the cars are hopefully going to bring back to us actual racing Sundays with lots of intense action and with the FOTA promise of more overtaking. Add this to Schumi in a fast car designed around him and you have salivation as the 5 lights go on in 2 days 16 hours 51 minutes and 05 seconds. Cant freaking wait !!!!!!!!
Pictures courtesy jamesallenonf1.com
Posted by Jitesh Watwani